Desperate, helpless, dumper-than-a rock and infuriated: that could be a proper summary of how the following games will make you feel. These titles are the chosen ones; so exhaustingly demanding and difficult, that will test the limits of your intelligence, patience and inventive way of thinking. If you believe you’re brilliant, these video games will -most likely- prove you wrong.

Be prepared to be startled and allow me to welcome you into a world that will test your brain!

Notpron, released in 2004, is a game dedicated to making you cry. It’s the master of its kind, surpassing every other puzzle/ riddle video game. After struggling to play it for a million years, I’m convinced that NOONE can finish it without using any hint. Its developer, the German mad genius David Münnich, truly surpassed himself by creating a puzzle that can’t be compared to anything. Notpron can be found online and it’s free, so it’s quite easy for you to give it a try. But be prepared: it requires morse code, musical and IT knowledge, remote viewing, out-of-the-box thinking, wild imagination and -basically, knowledge over (almost) everything. So, if you’re ready to abandon the cliffhanger I’ve left you on, press the following link and welcome yourself into chaos. At least, you have been warned!

P.S. If When you search hints online, keep in mind that the majority of the answers is changed, in order to keep the difficulty going... 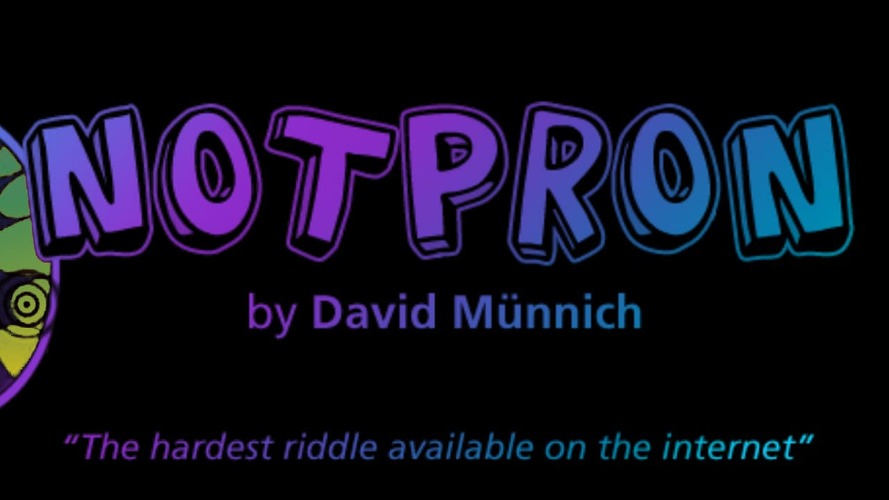 Available on: Web Browsers (preferably Firefox as suggested within game)

The Witness is full of contrasts. It commences quite easily and smooth, with bright and colorful backgrounds but, as the time passing by, the puzzle element is getting stronger and stronger. What makes me love (and hate) this videogame is the following: everything in its environment is calm, colorful and cute, yet the riddles are VERY challenging. So, it’s uplifting and frustrating at the same time, which makes me uncomfortable. Enough with my personal traumas though! As I was saying, The Witness is full of puzzles, which revolve around cables, panels and grids. They require pure logic and they’re beautifully placed upon each other. The game’s lead designer is Jonathan Blow, the mastermind behind Braid, so its success didn’t catch us by surprise. It was released in 2016 by Thekla,Inc and it’s an open-world game with first-person perspective, offering an impressive -and unusual for its kind- experience. If you love demanding puzzles combined with relaxing backgrounds, then The Witness is your game!

Superliminal is the game a mad scientist would create. No words can describe its legacy, since it revolves around an ultra-inspiring idea: certain objects, when picked up, can be moved towards or away from the player, but when placed back down, scale to the size as the player had viewed them. Yes, you guessed right! You’ll witness countless of optical illusions, forced viewing and -basically, you’ll feel just like Alice in Wonderland did. This paranoid game, released in 2019, is developed and published by Pillow Castle and it’s played through first-person perspective. Its combination of science and delusion is so remarkable, that it gave me a huge mind blown the first time I tried it. Superliminal is a hidden gem amongst puzzle games, since EVERYTHING on it depends on your ...perspective. You have to play it, you’ll adore its originality!

Stephen's Sausage Roll, released in 2016, is a puzzle video game created by Stephen Lavelle and developed by Increpare Games. The player controls a character who pushes sausage links to grilling locations on a grid -no kidding. Sounds simple, right? Don’t be fooled and allow me to elaborate! The setting is pretty surreal and, in order to be honest, it’s also quite confusing to look at. Moving on though, after reading its title -and without doing any further research about its genre, I was pretty sure that it would be an easy going trolling-game. But I was deadly wrong. In fact, it’s one of the toughest titles I’ve ever played and I’m not gonna share my progress with you, since it’s quite embarrassing. Its difficulty will make you frustrated and you’ll go mad over and over again, because this is a genius monstrosity. And, when you’ll think ‘It can’t get any harder that this’, it will prove you wrong… So, if you enjoy experimenting, code-breaking and if you like being left stuck and clueless, willing to spend a century on a game, give Stephen's Sausage Roll a try!

Ah… The Longest Journey. The game that made me burst into tears with its touching story and its lovable characters. Dirty alleys with blur colors in combination with magical kingdoms, are flawlessly conveying intense feelings and morals about life. Even though it’s not in general a particularly hard game, it contains some almost-impossible-to-be-sold puzzles, so it deserves to be contained in this list. The story revolves around April Ryan, a girl who can shift through space and time, as she tries to maintain the world’s balance. Developed by Norwegian studio Funcom and released in 1999, it deepens in character’s backstories and it requires creative and out-of-the-box thinking. All of its arcs are perfectly made, with dreamy aesthetics and sophisticated themes. This point and click adventure will drag you into a world full of enigmas and obscure puzzles, that will test your limits. It’s a personal favorite!

In this game you are Baba, a cute, bunny-like creature. When I first played this game I was quite impressed by its main idea, which focuses on setting your own rules and manipulate the levels, by interacting with blocks and plenty of objects. Created by Finnish indie developer Arvi Teikari, it was released in 2019 and is already considered one of the best -and most demanding, puzzles ever created. Set in an adorable 2D setting, it manages to test EVERY SINGLE SKILL of yours, since it requires brilliance, patience, experimentations and an imaginative way of thinking. In order to be honest with you, I must confess that, when I first played it, I didn’t think it would be this hard. But I was proven deadly wrong. So, here I am, an eternity later, moving tiles, playing with word combos while trying to reprogram my brain in order to figure out the solution. Wanna give yourself a hard time? If the answer is ‘’yes’’, go ahead and play Baba Is You!

First of all you gotta know that, when I see Lara Croft, my eyes turn heart-shaped. Having played all of the original five titles of the series, I can assure you that all of the Tomb Raiders are awesome, yet none of them have The Last Revelation’s charm. Amazing plot? Check. Extremely difficult riddles/ puzzles? Double check. Numerous levels that it takes an eternity to finish? Triple check. Its story revolves around the famous female archeologist, who once again tries to save the world from chaos. The game has dark aesthetics and not only it usually reminds of a maze, it also causes strong claustrophobic feelings. It’s addressed to an intelligent and patient audience, requiring many different skills at once. It took me an eternity to finish it, but it pays off. It was released in the distant 1999, developed by Core Design and published by Eidos Interactive and it’s a game so exhaustingly long, but so challenging and smart, that you can’t help but cherish it.

Last, but not least, comes The Dig. This point and click retro adventure game was released by LucasArts in the distant 1995. Inspired by an idea originally created for Steven Spielberg's Amazing Stories series, it contains riddles and puzzles almost impossible to be solved. But, first things first. Its plot revolves around the existence of aliens and the player needs to constantly interact with objects and non-playable characters in order to proceed. It’s a really hard game to conquer and you’ll be stuck in plenty of its levels, since it contains some utterly difficult puzzles. You’ll probably find yourself wanting to consult a walkthrough, but DON’T -don’t try to cheat your way through! Trial and error in combination with logic, will most likely allow you to finish this fascinating game. Why don’t you give it a chance?

Want more Stories like this?
Written 107 Weeks Ago
by Sofia Evangelidou
Gaming Recommendations