Did a Cyberpunk 2077-Themed Xbox One Controller Revealed?

Something very weird is going on around the Xbox’s website. More specifically, it looks like it’s been ...hacked. And, after that, this very suspicious tweet made its appearance.

Rumors by Dudeman127 support that a Cyberpunk 2077 Xbox One bundle will be announced next week, on April 20. No one knows yet if the photo he shared is accurate, although a console and a controller are a little bit visible in Xbox website’s tease video.

In addition, today a listing for a Cyberpunk 2077-themed Xbox One wireless controller made an appearance on Amazon.ca. It’s now taken down, but Pure Xbox managed to capture an image and product description:

Live the mercenary life with the Xbox Wireless Controller - cyberpunk 2077 Limited Edition, featuring a rugged design based on Johnny Silver hand and tech-enhanced insignia. This Xbox Wireless Controller immerses you in a future where technology is the key to survival. Button mapping allows you to customize your controller just the way you like it. Plug in any compatible headset with the 3.5mm stereo headset jack, And with Bluetooth technology, play your favorite games on Windows 10 PCs, tablets, laptops, and mobile devices. 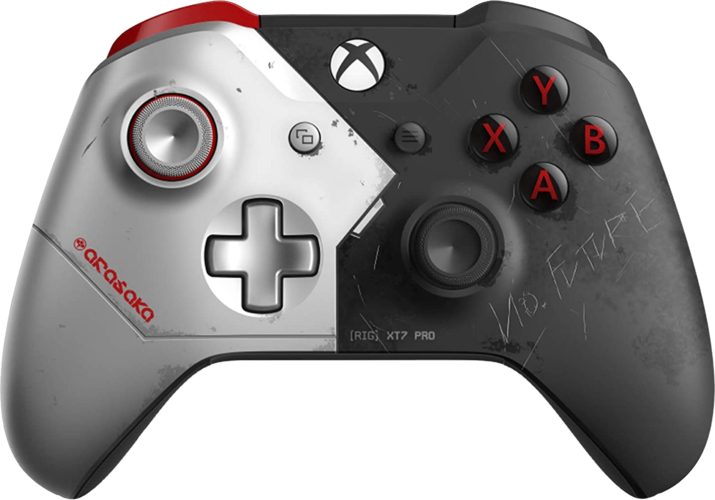 So, maybe, on April 20 we’ll receive some Cyberpunk2077-themed Xbox One news.

What’s your opinion on the controller’s possible design?

Want more Stories like this?
Written 146 Weeks Ago
by Sofia Evangelidou
Console Hardware