Assassin's Creed Valhalla is fully unveiled and comes for PS5, Xbox Series X at the end of 2020

Assassin's Creed Valhalla was revealed yesterday through a long livestream and now we have a first picture of what awaits us from the first trailer that has been released and confirms release for PS5 and Xbox Series X. The game will be released in the festive season of 2020 (near releases of the two new consoles) and will be available for PC (via Epic Games Store and Ubisoft Store), PS4, PS5, Xbox One and Xbox Series X, while it will also be offered through the subscription platform Uplay +. Ubisoft Montreal and the team behind Assassin's Creed IV: Black Flag and Assassin's Creed Origins are responsible for its development. The protagonist of the title is Eivor, a wild Viking who is ready for tough battles.

Assassin's Creed Valhalla brings players to a dynamic and open world in medieval 9th-century England and Alfred The Great. In addition, the game will offer raids, expansion of the settlement and strengthening the power of its character and influence. Many customization options will be offered to the hero, which go beyond simple hair colour and tattoos. Political alliances, decisions in battle and choices in dialogues will be able to influence the game world and therefore players will have to be careful about what they do at any time when they are asked to make a decision. 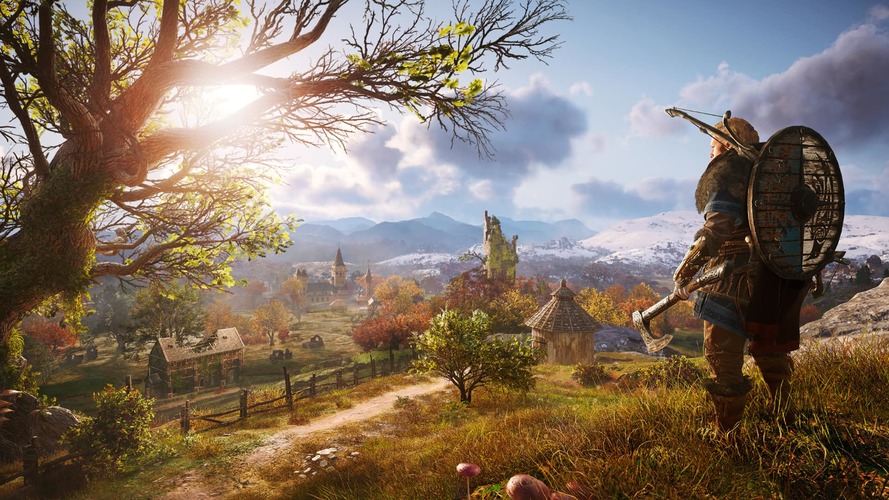 The game will feature 4 kingdoms: North Cumbria, East Anglia, Mercia and Essex. The player will be able to instruct his ships to go on raids, attack other settlements and use the spoils to develop their own. In the same way, of course, the player's settlement is open to attack by anyone around the world at any time. The battles will be more difficult than those in Origins and Odyssey, with larger weapons. The hero can hold double weapons in the game, such as swords, axes and shields, and the development team has used a wide variety, so that even after the first 20 hours, the player can find new types. There will no longer be a leveling system, but the hero will now have a "power" meter.

Sea battles play an important role again, and there will be several options for exploring the water. The game will support pet companions, while there is already confirmation that the protagonist can call wolves to help him in battle. Newer generation consoles will have faster loading times and a - overall - more exciting world.

In addition to the basic version, 3 collectibles will also be released:

Those who pre-order the game will get the extra shipment of The Way of the Berserker, where the protagonist will work with a legendary Berserker on his quest for revenge.

Want more Stories like this?
Written 143 Weeks Ago
by Manix
Console News